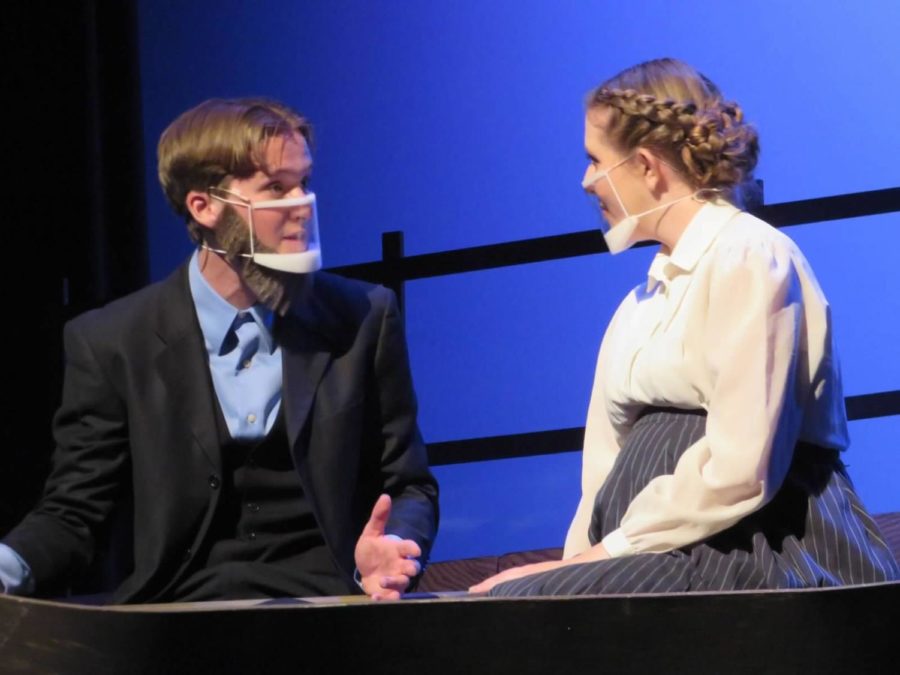 The lights dim and the chatter of the crowd dies as whimsical harmonising rings through the trees and wooden structures of the set as a masked silhouette emerges from the sides of the stage. The warm colors of light shine in as the singing gets louder and louder. The show has just begun.

On Oct. 14, the theatre arts program hosted their first show back in person with the dramatic and coming-of-age play “Anatomy of Gray.”

The show takes place in a rural town in Indiana 1880, where June Muldoon, the main character of the story, wishes for a town healer after the death of her father. Her prayers are seemingly received when Dr. Galen Gray flies to the rescue in a hot air balloon.

According to theater arts director Melissa Staab, the play touches on the pain of loss while shining light on a small town story. Staab said that when deciding what play to choose, the theme of Anatomy of Gray spoke to her more than the others.

“We’ve never done a show on this kind of subject matter before,” Staab said. “I found a lot of parallels to what had been going on in our world. It relates to loss, love and acceptance and I feel like it connects back to students’ experiences today,”

Although the play tackles heavy themes, according to senior Jack Bergman, the assistant director of the play, the show is still “fun and humorous.”

“The characters just feel a lot more alive in the world,” Bergman said. “There are some genuinely funny moments and some genuinely endearing characters’. The characters go through hard times but there are many humorous fourth wall breaks that keep the live audience intrigued and laughing.”

For the theater arts program, this play was special, as one major part of theatre was taken away during distance learning, the connection the actors had to the audience. While in isolation, the theatre program had to make great changes as they resorted to performing shows with digital backgrounds and computer screens. But, after almost two years of social distancing, the theatre arts program is finally back on stage with an in-person audience.

“We’re just so happy to be back,” Staab said. “Theater is an in person experience, and there’s just nothing like it.”

A major change the theater program had to adjust to was manually working long hours after school again. The theatre program worked for hours, five days a week for over two months to rehearse and create the setting of “Anatomy of Gray.” In total, over 120 hours of work from the lighting, creating props to rehearsing lines went into creating the first playback on campus with almost every piece of the play being pitched, produced, and created by the students.

“All of that is someone’s work,” said the play’s male lead, senior Bodie Beaumont-Gould. “They’ve put six weeks of dedication into it and it’s great that after all our hard work it can finally be seen by a live audience.”

“Words don’t really describe how different the vibes are,” Beaumont-Gould said. “Being able to perform in person in front of a live audience was taken away from the theatre department, but now we have the ability to make a direct connection with the audience. We became closer as a group in the process, we plan to make every moment count.”

Coming out of a time after the pandemic, Beaumont-Gould feels that people need something “positive” and something they can relate to. He feels that the play “comes from a loss and from love” and hopes that it will resonate with the audience.

“This show shows how quickly something can just kind of be taken away,” Beaumont said. “ It allows people, the audience and the cast and crew, to remember to make every moment count.”