Although the finale was underwhelming, it was overshadowed by the in-depth character arcs and the plot, following the couple Wanda and Vision as they live across several decades 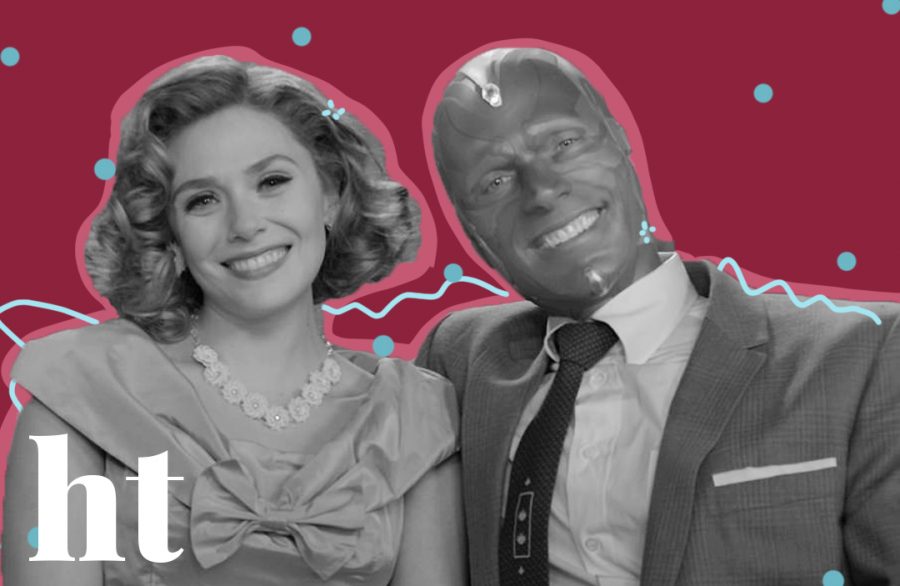 The most unusual couple in the Marvel Cinematic Universe now has their very own series. On Jan. 15, “Wandavision” premiered on Disney Plus, with new episodes, ranging from 25 to 45 minutes long, being released weekly. Taking place three weeks after the tragic events of “Avengers: Endgame,” the self-titled show-within-a-show centers around the Marvel superheroes Wanda Maximoff and Vision as they navigate their lives in the small-town neighborhood of Westview, New Jersey. The show starts off with a typical sitcom-style format, with engaging banter between characters coupled with live studio audience reactions; however, what initially seems to be an Avengers-themed sitcom on the surface, really has many underlying secrets hidden beneath.

I had no clue what to expect going into this, and having just finished watching the season finale, I can confidently say that this is, by far, my favorite Marvel production to date. This show is completely different from anything I have ever watched; it is so well thought out and executed, and it does a great job of keeping the audience on edge. I always found myself counting down the minutes until 12:00 a.m. on Thursday night so I could watch each new episode as quickly as possible; after each episode ended, I rushed to read the numerous Reddit discussion threads, watched YouTube breakdowns of the episodes and theorize with other fans.

Every episode was centered around specific “decades” sitcoms—“The Dick Van Dyke Show” from the ’50s; “The Brady Bunch” from the ’70s; “Full House” from the ’80s—which introduced a lighthearted atmosphere to the plot, but also had fans asking how and why two of the most powerful heroes ended up in this situation.

An even more unique—and arguably the best—part of the show were the opening theme songs in each ‘WandaVision’ episode, as some even topped world music charts. Each one—excluding what I believe to be the greatest song to exist, “Agatha All Along”—was decade-specific and featured the iconic ‘WandaVision!’ catchphrase at the end. In addition to the music, the set design and costume were extremely well done; Wanda and Vision’s costumes accurately fit within the different time periods, and they reflected the quirks of their characters. And finally, after years of seeing her outfits remain more or less the same, the Scarlet Witch got her well-deserved costume reveal in the climax of the final episode. The designers’ interpretation of her comic book outfit was phenomenal and is what I consider to be the best adaptation of a Marvel costume.

The different character arcs depicted in this series were also some of the most in depth ones that I’ve seen in the MCU. Since this was a series of episodes rather than a condensed movie, viewers had ample time to familiarize themselves with the characters and watch a more fleshed-out narrative carry out.

S.W.O.R.D. agent Monica Rambeau, FBI agent Jimmy Woo, and astrophysicist Dr. Darcy Lewis were featured in continuation from their previous roles in the Captain Marvel, Ant-Man, and Thor franchises respectively. Marvel fans, myself included, loved their quick-witted and supportive dynamic as they observed Westview from an outsider-perspective. Throughout the series, I was rooting for them to uncover the mysteries behind Westview, Wanda and Vision, as they collaboratively worked together to answer many of the questions asked by the fandom. But, the storyline that I was particularly engrossed in was Wanda’s, as each subplot—from the mystery of how Vision is still alive after his heart-wrenching death(s) in “Avengers: Infinity War” to the summoning of the “Hex Trio” (Monica, Jimmy and Darcy)—was strategically tied to her main one. The development of Wanda’s full powerful abilities, her acceptance of her identity, and her grief and emotional tipping point were focal points in the plot. Especially during the climax of the show, Elizabeth Olsen’s flawless performance embodied a fierce force, highlighting Wanda’s intense emotions.

Several new characters were introduced as well. Wanda’s twin sons, Billy and Tommy, were two of the most prominent new additions to the MCU, and they were extremely lovable and playful, as all kids are. Seeing Wanda together with Vision, Billy and Tommy elicited a sense of power; they were the ultimate super-family, and it was apparent that their love ran deep for each other. I grew increasingly attached to them.

Granted, there were some mishaps and gaps in the storyline; fans were particularly underwhelmed while watching the finale, claiming it felt like a rushed ending to such an anticipated series. However, I’m too big of a Marvel fan to dwell on those aspects of the show, and I also tried to remain cognizant of the fact that COVID created many hardships and limitations while filming. I think Marvel did the best with what they had; the good definitely overshadowed the bad.

All in all, this show was truly amazing, and I could go on and on rambling about it. If you are ever in need of a quick-but-worthwhile source of entertainment, I highly recommend checking out Wandavision. I definitely know that I will be rewatching it over Spring Break.