Your rights within school gates

The first amendment of the Constitution guarantees every U.S. citizen the right to freedom of speech, petition, religion, assembly, and press. However, students’ rights change the second that they step onto campus; their freedom becomes limited. With the polarized political climate, more students are vocalizing their opinions — whether it be by kneeling during the national anthem or walking out of class. So what rights do students have on campus?

“If your right infringes upon another student’s right to feel safe and respected, then I’m going to talk to you not because you don’t have the right to choose your T shirt, but because that still has to be within the context of everyone’s rights.”

The key court case defining the extent of students’ freedom of speech on school grounds is the Tinker vs. Des Moines case of 1969, which ruled that students and teachers do not “shed their constitutional rights to freedom of speech or expression at the schoolhouse gate.”

However, these rights still have limitations within a school, as not all student speech was protected by the ruling. Student speech that “materially and substantially interfere[s] with the requirements of appropriate discipline in the operation of the school” is not protected, and thus is subject to disciplinary action by school officials.

“The interpretation that most courts of give it to that material substantial disruption prong of the Tinker standard is speech that creates a serious, physical disruption that doesn’t allow normal school activities take place,” Student Press Law Center Senior Legal Counsel Mike Hiestand said.

For example, if students were to post signs advertising a walkout, encouraging other students to participate, Hiestand believes that the signs would fall under the speech prohibited by the Tinker standard.

“That would actually be the sort of speech that the court was talking about because that’s sort of speech that anyone can reasonably conclude that that was going to lead to a serious physical disruption of school,” Hiestand said. “Walking out of a class, that’s about as disruptive as you can get.”

Principal Jens Brandt, and the California Ed Code, classify “disruptive” speech as anything that is “obscene, libelous [or] slanderous.”

“So this is the reason for example, somebody cannot wear a swastika on a T-shirt, because when people come onto a campus have the expectation and the right to it, being free of hate and a safe environment,” Brandt said

Students in the past have tried to use their “freedom of speech” as justification to say or do whatever they want on campus, including justifying hate speech. Brandt says he supports students’ right to express themselves and their beliefs, but at the same time he must protect other students’ safety.

“A few years ago, we had some students that wanted to have the Confederate flag flying out of the back of their car and park on campus. I let them know that they were not allowed to do so because of the hate that is a associated with it,” Brandt said. “What I communicated to these students was the following: You have every right in the world to put that flag on the back of your car as long as it’s parked off of our campus. We need to make sure that all students on our campus feel safe and protected at all times.”

Meghan Schooler, assistant principal at RUHS, constitutes anything that can disrupt a students’ physical or mental state of mind as speech prohibited under the Tinker standard.

“If speech makes it so that another student cannot be focused and does not feel safe, it is disrupting the environment. Disruptive is not just yelling something in the middle of class,” Schooler said.  “Whether the threat is physical, verbal, or otherwise towards another person, it very disruptive for that individual during school. It’s impossible to think about high level math problems when you’re wondering whether or not you’re safe.”

Brandt also notes that dress code does not fall under freedom of speech or expression.

“We have to make sure that this is a distraction free environment for students to learn. And we’re just asking people to be reasonable. I’m not asking for people to dress conservatively,” Brandt said. “I think everybody can agree upon the fact that we just don’t want body parts essentially being exposed. And, like I said, a distraction free environment, not just for our students, but our staff members to feel comfortable teaching young people.” 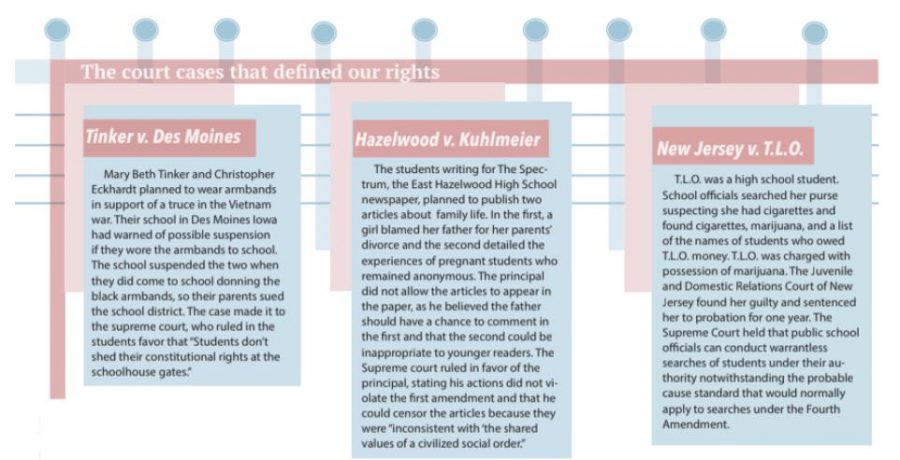 The fourth amendment grants all Americans protection against unreasonable search and seizure, protecting their right to privacy. Students’ right to privacy, however, became ever more complicated with the advent of social media

Hiestand believes one of the most contested issues in the legal community is where the line is drawn on the school’s jurisdiction online.

“There used to be avery clear line between what a student did on campus and what a student did off campus and what sort of authority school officials had over that. So the minute that you walked across the street from the school and onto the public sidewalk used to be pretty much the end of your principal’s authority over you,” Heistend said. “With the internet and social media, the line has changed.”

Content posted on public accounts is fair game for administrators to obtain, according to Heistend.

“If it’s a public account, once you put stuff online in a public fashion there’s no legal restrictions on school officials or anybody else being able to look at it,” Hiestand said. “Whether or not they can take you and then punish you for things that you’ve done online outside of school hours, that’s the hot issue right now.”

Because actions on social media can affect a student during school hours, mentally or socially, Schooler believes that school has the right to intervene.

“If something is disrupting the learning environment, it doesn’t have to occur during school hours. There can be something that’s posted at midnight that you’re still thinking about the next day,” Schooler said. “So it can be disruptive, even if the posts and actions took place outside of school hours. It can still impact the school day.”

However, to Hiestand, what happens online at midnight is exactly the type of senario the school should stay out of.

“If a student is engaged in conduct off campus, it’s not the job of the principal to punish students for material they are writing from a private computer at midnight from their bedroom,” Hiestand said. “That’s really dangerous slope to start down. That’s the sort of behavior I think school officials have no business being involved in. They should have much better things to do than to nominate themselves as the off campus police like that.”

Hiestand argues that there is typically no conclusive connection between actions on social media and their impact during the school day.

“We’ve seen these outrageous sorts of instances where school officials think that they do have kind of 24/7 authority over students, and that’s absolutely not the case,” Hiestand said. “The only time where school officials have been able really to punish students for their off campus expression on social media or otherwise lately when there is a very clear connection to speech the that happens to be taking place off campus and on campus activities or conduct.”

Brandt agrees that illegal activities that are posted on social media do not yield disciplinary consequences unless the students posts about buying or selling of illegal substances or they are an endangerment to themselves or those around them.

“The only reason we would get involved is if there was fear the student was endangering himself or herself. If there’s a photo of a student passed out next to alcohol and or drugs, that’s where the counselors would intervene,” Brandt said. “There wouldn’t be any disciplinary consequences. If there’s anything like threat of violence, like if you have a student holding a gun or holding a knife, of course, police [would be] involved immediately; there would be disciplinary consequence immediately. I think this goes without saying.” 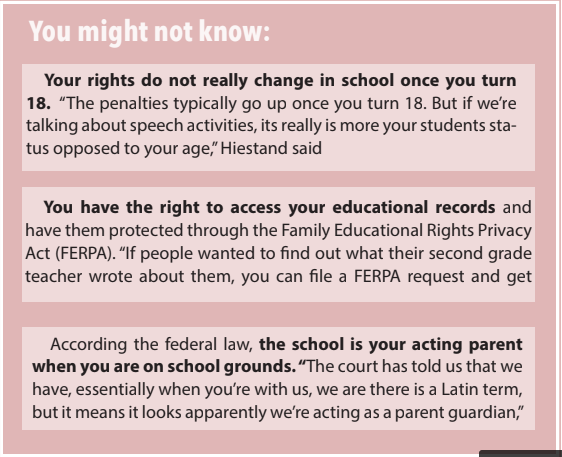 The High Tide has the right to publish whatever it wants, as long as what it publishes is not obscene, libelous, or slanderous, or solicits illegal activities on school grounds. Administraton cannot prevent the publishing of an article as long as it meets those conditions.

The right to freedom of press as a student publication is protected by the Calif. Student Free Expression Law of 1977. Only 13 states have laws similar to Calif. The rest of the country does not have these additional protection and is governed by the standard set by the Hazelwood School District v. Kuhlmeier case of 1988.

“In the 37 other states, students are in deep trouble in many cases. The Hazelwood case really did get rid of any sort of attempt to balance student first amendment rights against the authority of school officials,” Hiestand said. “It pretty much gave all those sorts of rights to school officials after Hazelwood.”

The Supreme Court ruled school officials can censor an editorial or article because it is “inconsistent with the shared values of a civilized social order” — language used in the decision that Hiestand calls “crazy and unbelievable.” According to Hiestand, schools could declare an article “poorly written” or “inappropriate” so that is falls under this standard, opening it up to censorship.

Even though it would be illegal in Calif. to censor any content that is not obscene or libelous, Schooler says that she would not attempt to censor the High Tide if there was an article that she considered inappropriate.

“It’s less about what you can or can’t write,” Schooler said. “I would ask that the newspaper is mindful of the role you play in the community and take that seriously. I would hope that the newspaper thinks through what its printing and remembers that it’s a representative of this entire school.”

Petitioning is a way of letting people know that change needs to occur, whether it be on a school-wide or a national level. Students are able to petition to administration or the district if they are unhappy with the way that things are being run. However, regardless of how vocal students are, administration does not necessarily have to listen to anything students say.

Despite this fact, Schooler encourages RUHS students to advocate for the improvements that they want to see.

“I love the idea of people having agency and pushing or asking questions, or looking for routes to improve and change things,” Schooler said. “Administration is a place to start. We might be the one enforcing the rule that you don’t like, [but] that doesn’t mean that I’m not also open to discussing it with students.”

RUHS administration guarantees students their right to due process through what Brandt calls “progressive discipline.” This means conducting thorough investigations to find out who is responsible for the transgression.

“A good example of due process is really digging in deep and finding out who’s responsible for what, but we take our time with that,” Brandt said. “And you know, it’s innocent until proven guilty. And we look for evidence of the behavior and then there are consequences based on that evidence. That’s due process in our minds.”

Due process on campus means that everyone involved in the issue is asked for his or her perspective on what occurred.

“I want to hear what happened from your perspective, if there’s other people that were witness to it, or people that are involved that you think I need to speak to, I will speak to them. If the situation you were involved in had both a perpetrator and a victim, I would want both perspectives,” Schooler said. “And then based on as much evidence as possible, [I would] move forward with determining what seemed to happen, and what’s the appropriate response based on that, but never just based off of the account from one person.”