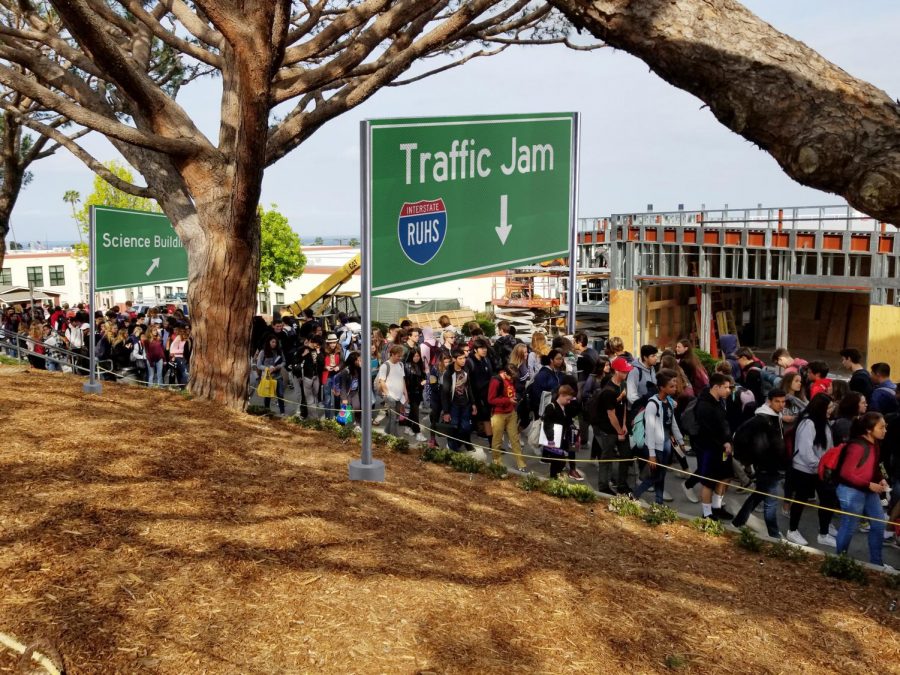 zAnnoying, frustrating, and stressful is how students and teachers in nearby classrooms describe the ongoing construction near the 700 buildings.

“I’m really annoyed with it. I know we need the classes but I wish there was a more effective way to do it.  I can’t hear the teacher sometimes and she’ll try to open the door but then it just gets way to loud,” sophomore Tatum Davis said. Davis has fourth period english in classroom 704 which is adjacent to the construction.

“To get the students reengaged multiple times throughout the class period is probably the hardest part,” Yi said, “The biggest [distraction] is when we’re having a group discussion or I’m giving a lecture and I’ll hear your typical construction noise and I immediately see my students distracted.”

Sophomore Ryder Phillips, is agitated by the construction. He describes it as “annoying,” and “angering” as it disrupts lessons.

“It interrupts class and the loud noises interrupt your thought process,” Phillips said, “It makes it so we have to move to different classrooms sometimes and it’s not the same environment. It’s really annoying.”

English teacher, Kerri Eastham, who also teaches near the construction, notices her students losing focus as well, and often moves to different classrooms around campus on important test or exam days to help limit the students distraction. This does add extra stress to her however, as she finds herself forgetting certain supplies necessary to her lessons. In short; she’s tired of moving from class to class.

“It’s hard on me from an organizational standpoint to go to a different room every class because I need books for one, I need markers for another,” Eastham said, “I’m tired of traveling. I don’t want to travel anymore.”
Congestion
Adding to the annoyance, Phillips and Davis often find themselves stuck in the bustling traffic of the only available walkway due to the construction.

“How it obstructs the walkway is crazy annoying because it makes getting to classes extremely hard since it’s super packed and jammed,” Phillips said.

To get around this, Phillips along with Davis and many other students, “hop the little fence” that separates the upper pathway from the lower. Both recognize hopping the fence may not be allowed or recommended, but as of now it is their best and only option to make it to class on time.
Cost worth the product
However, both student and teachers recognize that the construction is necessary for Redondo, and believe it is for the best.

“I understand that it has to happen. Nobody’s doing anything wrong. We’re growing and we’ve got to accommodate that,” Eastham said, “The noise, while it’s an inconvenience, there’s no getting around it.”

The only way to get around the noise is to move classes, but as Eastham described, it can be very stressful. However, Eastham and Yi are thankful to the rest of the staff for being so understanding and open to sharing their classrooms.

This cooperation and understanding is not only found between staff but the construction company as well, according to Brandt.  He and the crew continue to have weekly meetings discussing the project’s progress, ways to limit noise, and days when it is recommended teachers transfer classes. Brandt believes this communication is the main contributor to the success and smoothness of the project.

Yi having been part of the communication, agrees with Brandt.

“Admin has been really great about passing that [information] on to us. They’ve sent out emails to see how we’re doing, asking other teachers if we can use their rooms. They’ve done as much as they can do.”

Thankful for this, Brandt praises admin and students for being so understanding.

“I had initial conversations with them [teachers] before the construction started to just give them a heads up that there would be times it would get noisy and they’ve been incredibly patient and flexible,” Brandt said, “I really appreciate the rest of our staff as well for being so accommodating. They’ve been wonderful.”

The new classrooms will be “21st century classrooms,” with “technology, furniture and equipment necessary for students and teachers to engage in lively learning,” according to Brandt.

“We’re looking forward to having the classrooms. We’re working on who’s going to be in there, and we’re getting some new, collaborative furniture to put in there. We’re excited about that,” Brandt said.

In the end, students and staff see the construction as a necessary evil. While it is very stressful and annoying with the noise, it is something that needs to be done.

“I think it’s one of those things where at the end of the day though, there’s not much we can do about it because we do need more classrooms,” Yi said, “It’s not like there’s any other option. We just need to deal with it for the next few months.”